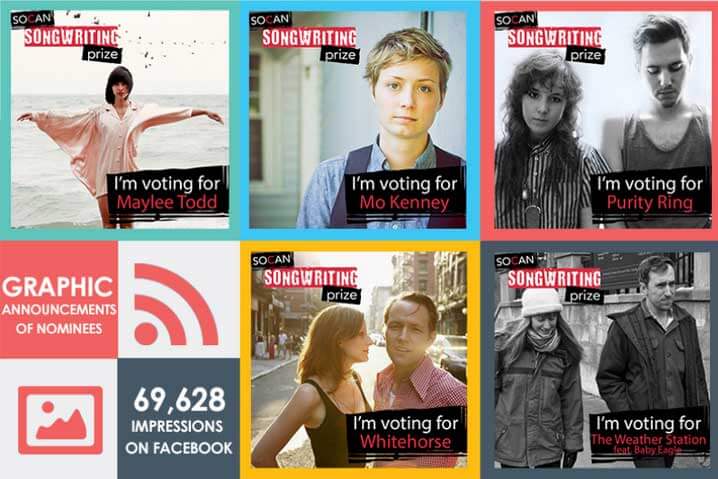 Last year, C ( Group teamed up with SOCAN, the society of Composers, Authors and Music Publishers of Canada, to develop a website for their songwriting prize— an annual competition recognizing the best in Canadian independent music. Since 2006, SOCAN has identified anglophone and francophone Canadian talent across the country. Past nominees include The Stills, Wintersleep, Timber Timbre, Arcade Fire, Dan Mangan, and Purity Ring—and we’re not just trying to name-drop. For the 2013 prize, the website worked in conjunction with social media efforts to really make a splash and get people talking about Canadian independent music. 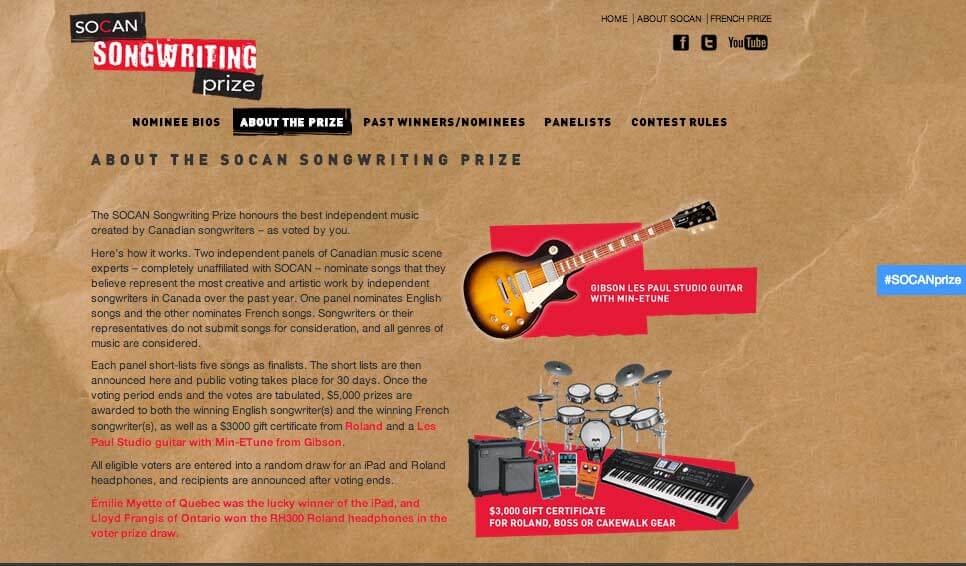 SOCAN’s website was designed with social in mind. In addition to showcasing the music, the website also encouraged people to vote for their favourite artist and talk about the songwriting prize on social media channels. Below each artist’s profile, users had the opportunity to like and share content directly to Twitter and Facebook. SOCAN’s Twitter stream was embedded into the songwriting prize site, with an ever-present (yet unobtrusive) side banner reminding us of the hashtag #SOCANprize.

SOCAN elevated their social profile with a variety of branded social components, including branded backgrounds for Facebook and Twitter. The backgrounds were produced in French and English and incorporated the songwriting prize logo as well as the names of major sponsors.

On Facebook, SOCAN enabled sharing features that allowed users to announce who they voted for. These graphic announcements generated more than 69,600 impressions in English and 63,899 in French. SOCAN’s social media team also shared live social posts from the event showcase, including photos and videos. These images generated 3,457 impressions, and videos shared received 1,233 views. Live social sharing as well as real-time updates and announcements allowed SOCAN to generate buzz for the songwriting prize and lead the social conversation. For both the French and English websites, Facebook was the top referring site, directing 32% of web traffic to the English site and 65% to the French site. On Twitter, SOCAN organized the conversation by using the hashtag #SOCANprize/prixSOCAN. In addition to kickstarting the conversation, SOCAN also got the right people talking: media mentions include CBC Music, CBC Radio, the Globe and Mail, the National Post, Huffington Post, and more. Within the music industry, mentions from Canadian Music Week, the Polaris Music Prize, and the East Coast Music Association helped boost the profile of the songwriting prize. They also got participating musicians and influencers talking, including rising star Mo Kenney, You’ve Changed Records, and CBC Radio Host Grant Lawrence. All in all, the buzz generated more than 750 #SOCANprize mentions and 384 new followers. 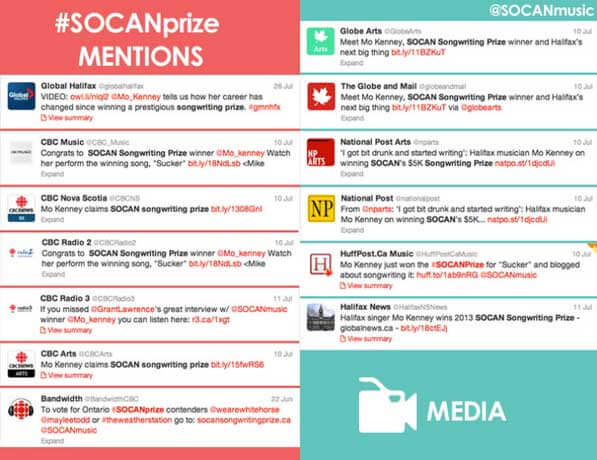 1. Design with Social in Mind

Set yourself up for social media success by designing a social site that puts social content front and center. Your website should be the central hub for your organization’s communications and should always gesture to where on the web people can learn more about you. Additionally, build features and functions that foster connectivity and user-generated content, such as SOCAN’s social voting feature.

2. Organize the Conversation, Get the Right People Talking

Does your event or campaign have a hashtag? If it does, are you making the right people aware of it? If people want to talk about your brand, don’t make them dig for your hashtag: make it evident and available (as a side note, keep hashtags short and sweet!)

3. Include Live Coverage and Real-Time Elements

If you want people to tune in to your messaging, communicate with them in real-time. Sharing photos and videos from important events or milestones is a great way to keep your community connected and to keep them included in the conversation.