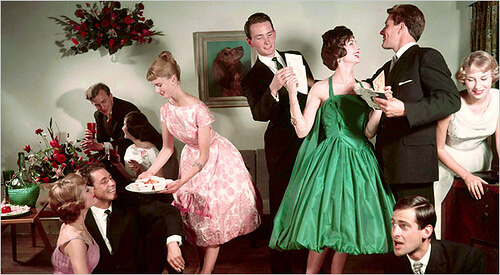 Fifty years ago, we started using the word “networking” to describe the act of building relationships for the purpose of professional development. At that time (circa 1960), “networking” meant growing connections; it meant handing your business card to the right person at the right cocktail party or luncheon. Before 1960, we barely used the word “networking,” save for a brief blip in the early 1900s, as demonstrated in the Ngram below:<

It wasn’t until twenty years later, in 1980, that we started using the term “social networking” to describe the activities taking place both on and offline. Shortly after the early 2000′s, our use of the word “networking” sharply declined, as “social networking” became the more popular term in circulation:

With technological advancements and the rise of social media, our understanding of what  ”networking” means has changed with the times. Before, “networking” conotated expensive business lunches or black-tie affairs; today, “social networking” can be done from home or a coffee shop—or anywhere there’s an internet connection. This is not to say that traditional forms of networking—attending galas and conferences, etc—are obsolete, but the term “social networking” has a distinctive online smell to it, with wafts of enterprises like Linkedin and Facebook, which were developed to facilitate the social networking process.

Many people, especially the Baby Boomers, have been lost in the transition from “networking” to “social networking.” In other words, people like my parents (who are in their fifties) are more familiar with traditional forms of networking compared to online ones. People like my parents didn’t grow up with Linekdin or Facebook, and many Bommers don’t innately grasp the concepts behind these online spaces.

Last week, I attended the Social Media conference in Toronto hosted by GoingSocial and Constant Contact. I met Gail Z. Martin, author of 30 Days to Social Media Success, and Lowell Brown, CEO of Going Social. Many who attended the conference were just “getting into” social media, and Gail and Lowell did a fantastic job of explaining the basics. Gail employed some really great metaphors (well, actually, they were similes) to explain social networking to beginners, and I wanted to share them on CRESCENT’s blog for any of our readers who are new to digital communications…. Gail said that Facebook is like a luncheon in that you keep the conversation pleasant and concise, and you  try to spread yourself out amongst the guests. And—as in a luncheon—on Facebook, you can gather useful and insightful data about your contacts that will prove useful in future. So, for example, you can learn that a prospect has a golden retriever or a daughter who loves hockey. While this  information may not seem important at first, Gail said that you can use this data as a conversation point later, since it’s always nice when people take an interest in you as a person and not simply as a client. Quite differntly, as Gail explained, Twitter is more like a cocktail party. The conversation is short, and people share pithy anecdotes or relevant pieces of news. A cocktail party (i.e. Twitter) is even less personal than the luncheon (i.e. Facebook), since it’s a group of people you may know only casually or not at all. And, like a cocktail party, it’s a great starting point for relationship building. Finally, says Gail, Linkedin is like a business meeting. It’s a strictly professional space, so make sure you’re dressing for the part. And how does “dressing the part” translate into the digital realm, you ask? Well, unlike a luncheon, where it may be appropriate to speak casually or bust out pictures of your new hamster, this kind of sharing is not suitable for Linkedin.