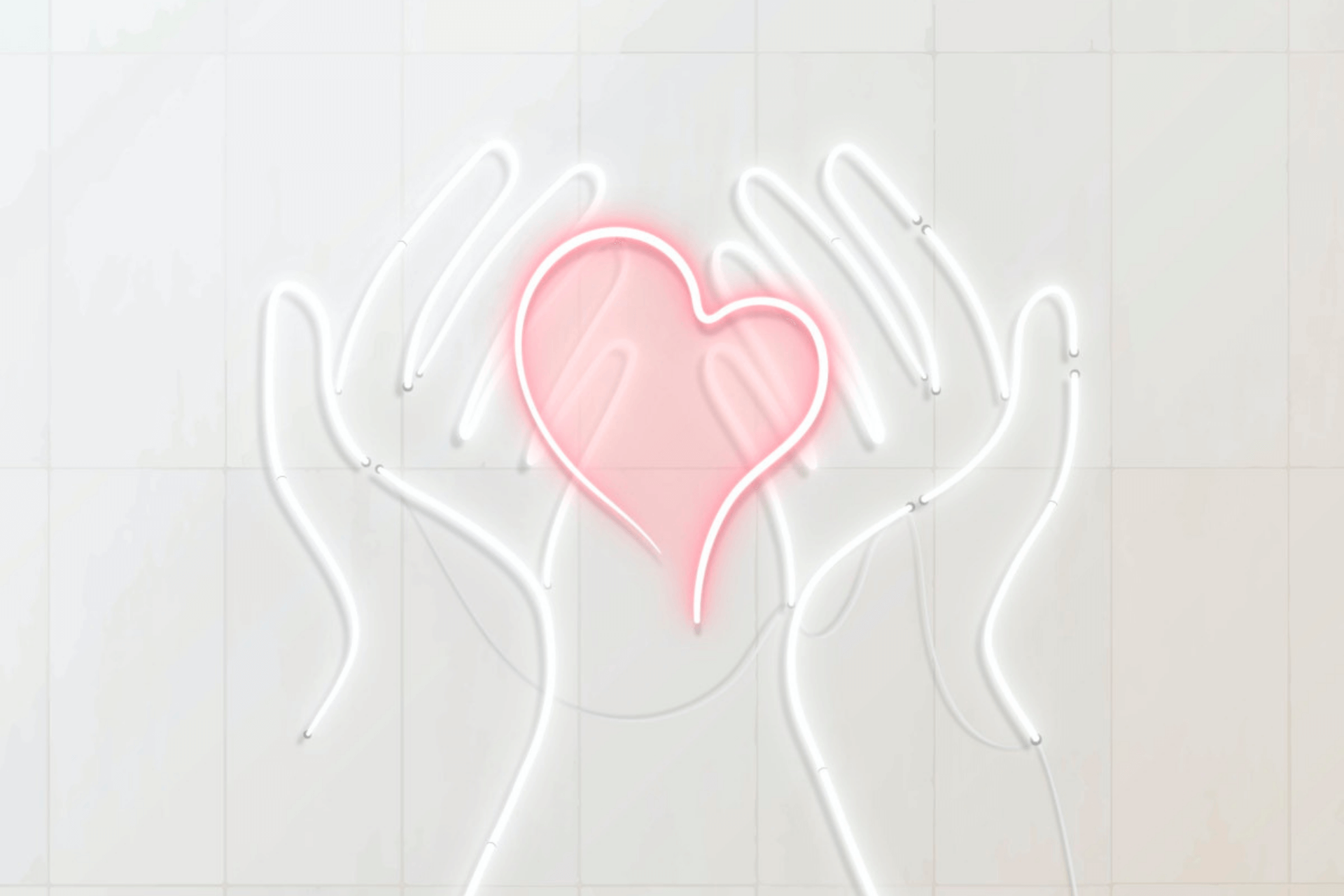 Although not everyone loves GivingTuesday, there’s no denying that it has a huge impact on nonprofits worldwide (and that your board will definitely ask you about it).

And one of the best ways to harness the power of this campaign?

Putting together an email strategy.

Although GivingTuesday started as a campaign primarily run through social media, due to the use of the hashtag #GivingTuesday, it’s since moved past that. Now, one of the most popular ways to drive donations on that day, and to encourage further giving, is by using email.

So, for this post, I’ll be focusing on how you can tell your story and collect donations on GivingTuesday using email (and get your board to stop asking questions).

Keep reading for some of the best emails I’ve seen to date, as well as the top four email best practices you can use.

8 Examples of GivingTuesday Emails that Work

Some emails convert better than others. Here are eight examples of GivingTuesday emails that reveal what best practices and some creative storytelling can accomplish.

It may seem obvious, but it’s important to include the name of your organization right away. People get a lot of emails, and it will help your email open rates and engagement if you communicate who you are and start building connections from the very beginning.

I also love the easy, step-by-step guide for giving that the ICO laid out for donors. The three steps they provide are clear and succinct, and showing the multiple ways you can give ensures donors can choose the option that works best for them (as well as allowing them to spread the word to their friends by giving them a gift certificate). 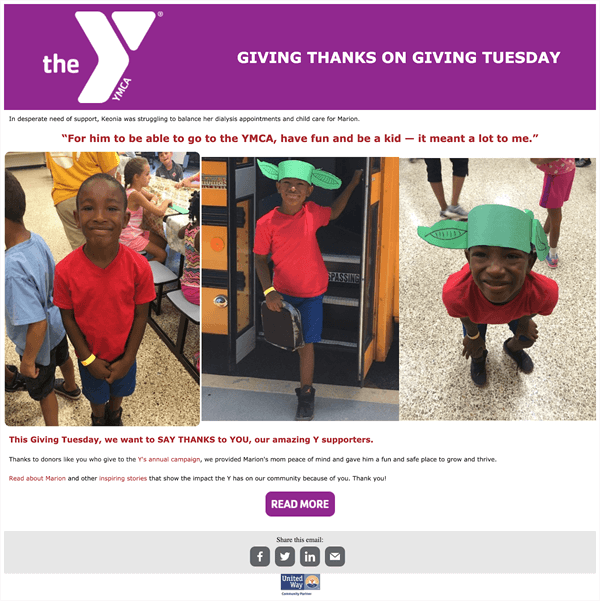 This YMCA GivingTuesday email is a masterclass in keeping a donor email short and keeping it human. While there aren’t a lot of bells and whistles to this email in terms of design and copy, it doesn’t need it.

By choosing to build a targeted campaign around children and including images of a child who has benefitted from donor support, the organization is showing the very real ways donations will impact their members and cause. It’s an emotional approach, but the positive imagery and soft call-to-action at the end of “Read More” make it genuine and not too pushy. 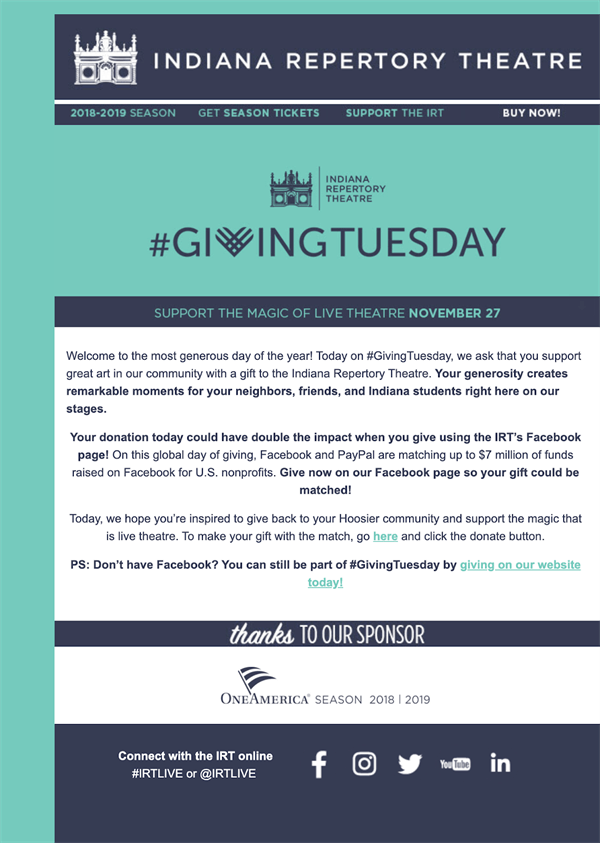 The Indiana Repertory Theater’s GivingTuesday email proves that a branded, beautiful email design doesn’t have to be complicated. And, thankfully, there are tons of free and affordable platforms you can use to build eye-catching emails.

Like the ICO email, they put all of the most important information front and center — their name, the GivingTuesday logo, and the date — and they highlighted multiple modes of giving including Facebook, website, and PayPal.

But this email really stands out because they offer an opportunity to double donations through a matching campaign. By directing people to donate through their Facebook page, it encourages social engagement and makes people feel like their donation will have twice the impact. 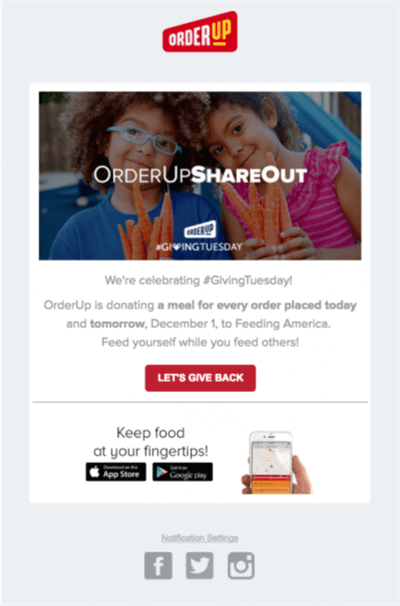 OrderUp wins the GivingTuesday email award for creativity! They came up with their own, clever campaign slogan, “OrderUp ShareOut”, that reinforces what GivingTuesday is all about while also communicating what OrderUp values.

But if you don’t have the time or resources to develop a targeted campaign that pairs well with GivingTuesday, don’t worry. OrderUp’s email also proves that a refreshingly simple message is perfect for donors on-the-go who are most likely reading their emails on their phones between errands, meetings, etc.

I also love how the call-to-action button is personable, making the receiver feel like they’re not alone in their giving. 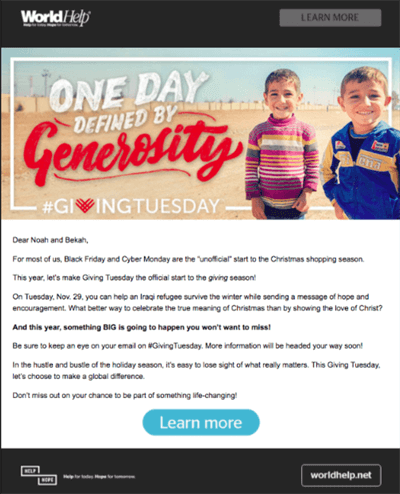 Speaking of being personable, we can’t talk about great emails without talking about personalization. This email reads like a letter personally written for the donor, beginning with addressing the recipient by name. Even though people are aware that GivingTuesday is going on, and they’ve probably received a few GivingTuesday emails, personalization will help your email stand out.

This email also wins points for being immediately relevant by mentioning the holidays, and it specifically mentions that all donations will be used to support Iraqi refugees so donors know exactly where their donations are going.

Finally, they end the email with a little teaser. This email is a part of a drip campaign that sends multiple emails to educate donors, build anticipation, and offer a soft approach to asking for support. 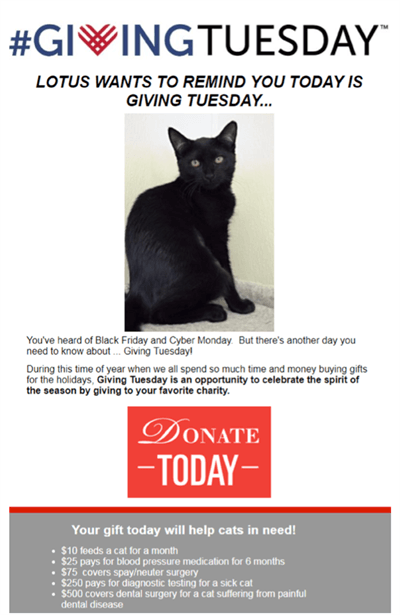 Who can say no to an adorable kitty? Not me!

And that’s exactly what Gifford Cat Shelter is relying on to raise support. But putting an image of a cute cat from the shelter doesn’t simply add a nice visual, it inspires donors to give because they can see a real need.

And by breaking down how donations will be used by amount, donors can see how their contribution will have a real impact.

Plus, showing how donations will be distributed encourages donations of all sizes. If a recipient was afraid that $10 wouldn’t make much of a difference, the breakdown will ease those fears and not make a perceived small donation a barrier to giving.

The first thing you probably notice about the North Shore Animal League of America is the countdown at the top of the email, which is great because it immediately creates urgency around the time recipients have to give and the need of the animals.

The digital countdown is also a good example of how highly interactive and visual emails make their mark when it comes to donation emails. In this email, they don’t stop at the countdown at the top, they also end the email with a progress bar that shows how far the organization has to go to reach their goals.

And, like a few other organizations on this list, they highlight the opportunity to double the donation and double the impact. Making this benefit clickable through the call-to-action button at the end means it’s even harder to miss. 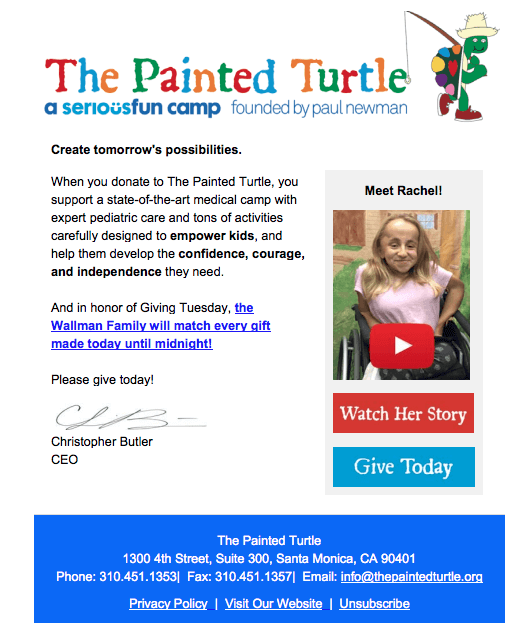 At this point, you’ve probably dabbled in video in some capacity, whether you’ve included one at an event, during training, or shared a video on your social account. By including a video in a GivingTuesday email, you’re bringing your organization’s story to life at a time of the year when donations are needed the most. You could even consider having the person you’re recording reinforcing the date of GivingTuesday, explaining where donations will be used, and thanking the donors in advance.

Just remember, if you’re going to use video, it’s important to try and make it as accessible as possible by including captions, audio options, etc.

Now that you’ve seen a few examples of compelling GivingTuesday emails, here are some email best practices to remember as you start crafting your messages:

The Impact of GivingTuesday Keeps on Giving

With the holiday season quickly approaching, it’s a good idea to get ahead of the game and start planning your year-end giving strategy.

Sending impactful GivingTuesday emails is a great way to help you gain support, raise funds, and hopefully inspire a deeper connection to your mission within your community — as well as helping kick off all of the giving happening in December.

This blog post by Tatiana Morand was published on the Wild Apricot Blog. Read the original here.